Last Friday our cousin, Marcus, in Germany got married. My husband still had to work Thursday, so Thursday night we left Belgium for The Netherlands to sleep over at my mother in law’s home so we can go together to the wedding from the Netherlands. It was Marsha’s first trip abroad. We left home at 18.30, took a tram to Antwerpen Centraal Station then took train to The Netherlands.

We got in The Netherlands at 22.41. Marsha was talking a lot, sleeping and looking around. She did not cry during the trip. Step father of my husband picked us up at station of Zwolle. We got at their home around 23.15. Marsha’s oma was very excited welcoming Marsha so Marsha got a bit shocked. She screamed and cried whenever her oma talked to her. We had dinner and then slept around 1 AM.

The next day Marsha woke up at 8 AM then we bathed her. We left at 10.30 and drove to Germany with two cars. At 13.00 we arrived at our aunt’s home and had lunch. Marsha slept in the car and woke up when we almost got there. Family from Indonesia came to attend the wedding. Marcus’ aunt (tante Dwi) and grand father (mbah Supardi). He is 88 years old but still healthy. Marcus’ family left first to the city hall for the wedding registration and we left 1,5 hours later to the party hall arrived at 16.10. I thought we would be late because of the traffic but glad we were not.

Marcus and his wife, Dani, arrived with horse cart, then they cut a heart shaped made from fabric and walked through it. Marcus dressed very Victorian style. They came into the hall with Game of Throne’s theme music. Their wedding theme is movie, so all the decoration is about movie. 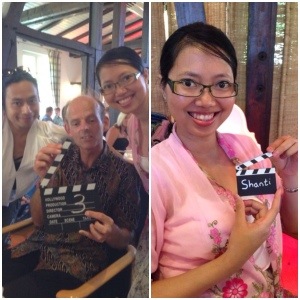 The dinner began with corn soup. It was nice. After that we got a break so people can smoke or go outside the hall. We got a lot of breaks which is very nice for people like me with baby. The main course is buffet. They have good food. Too bad I did not make picture of it. Before the dessert, the couple cut their wedding cake.
Their dessert were yummy. After dessert, they started to dance. The opening dance was Indonesian dance, Poco Poco. My brother in law gave a workshop to everybody in the party. Almost everyone was dancing except old people and people with babies. I wanted to join but Marsha was asleep in my arms. She was crying when people talk using microphone. It was too loud for her. Over all, she did good. My husband and I went outside during breaks to walk with her or breastfeeding her. My husband, brother in law, Marsha and I left earlier around 11 PM. My parents in law stayed because they were going to sleep over at our aunt. We drove back to The Netherlands and arrived at 1 AM. We went straight to bed after changing Marsha’s diaper.

Saturday afternoon we had late lunch at my brother in law’s house with my father in law. He made noodle soup. I am glad Marsha could meet her opa again. 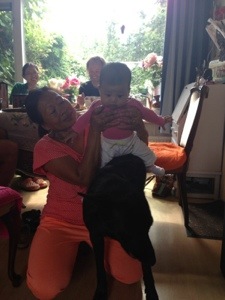 Marsha was not afraid at all but she just looked confused. Marsha tried to hug Nina few times. Nina is a well trained dog and she is a very lovely dog.

Around 13.30 my mother in law’s friend came to see Marsha. She gave Marsha gift. She also just became a grand mother.

We went to train station Zwolle at 16.30 to go back to Belgium. We took a picture before getting into a train. 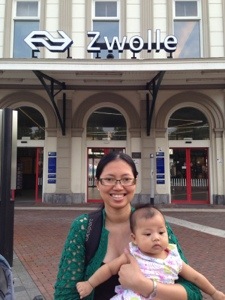 At 22.00 we got home. Marsha slept and sat on our laps on the way home. As usual she was doing very nice on trip. I am so proud of her.